Welcome to PoemAlley, Stamford, Connecticut's eclectic venue for poets, poetry reading and discussion! Open to anyone living in Fairfield County and the surrounding area, we meet Tuesday nights at 7:30 pm at Curley's Diner on 62 Park Place (behind Target) . Come contribute, get something to eat, or simply listen!

The Savoring Of Words and Wine: Remembering Jane Weston

Following a protracted illness, venerated PoemAlley member Jane Weston passed away last Tuesday at the age of 92. She will be greatly missed.
Usually from the favorite vantage of a corner booth shared with her friend Norm Heller, Jane was known to the group meeting weekly at Curley's Diner and returning guest poets for her sprightly smile and well-observed feedback, imparted over a glass of wine.
While not a poet, herself, Jane was especially valued as an island of serenity when the stream of conversation got occasionally heated in response to themes raised by a particular piece of writing.
Jane was also active in the Green Party, having run for public office in Fairfield County several times, including Registrar of Voters in Weston and as Judge of Probate in Stamford (winning 11 percent of the vote). In addition, she served two terms as Co-Chair of the Green Party of Connecticut.

Services are tentatively planned for this coming Saturday or Sunday at Lacerenza Funeral Home at 8 Schuyler Avenue in Stamford; Zoom access will be provided online for those unable to attend. Friend and fellow PA member Richard Duffee, who is Jane's conservator, can be reached at 203-278-4013 for further details.

Posted by Rolf Maurer at 5:03 PM No comments:

Prolific digital artist and speculative writer Robert Zwillig will be filling in for Frank Chambers and Ralph Nazareth as guest host of tonight's Open Mic poetry program at Barnes & Noble in Stamford, where all are invited to have a listen, or to bring something to read, either of their own creation, or by a beloved writer.

Following up on his November featured reading, where he shared material from last June's Modern Primitive Poetry 36 Illustrated Titles With Out The Words and other titles, Robert is a familiar, active member of Tuesday Night At Curley's/PoemAlley and is known for his satirical genre-bending/blending approach to the associations between the environmental, the technological and the socio/economic—not only in terms of where such associations find us at the moment and may be taking us, but even where they might have taken us, too, as described in the 2018 three-part short story, Steam Age Fighter.

Founded by Frank Chambers, Barnes & Noble’s Open Mic Poetry meets the second Monday of each month in the Music/Movies section on the main floor of the bookstore (located in the Stamford Town Center), beginning at 7:15 p.m. 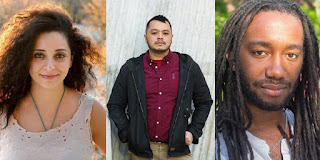 PoemAlley and other members of the area poetry community are invited this coming Sunday to a poetry salon hosted by Franklin Street Works of Stamford, featuring (above, left to right) three culturally-diverse poets, Sara Elkamel, Jan-Henry Gray, and Malcolm Tariq, who dissect normatively-imposed concepts of distortion and invisibility in relation to nationality, ethnicity and gender identity as part of their creative practice.

The free reading, beginning at 3:15 pm, is partially sponsored through the Stamford Arts & Culture Community Arts Partnership Program and complements FSW’s current exhibit, Otherwise Obscured: Erasure in Body and Text, which will end its run on January 26 with a closing party, offering a complementary wine/champagne reception and a final tour conducted by program curator Danilo Machado (right), who selected the three poets for their alignment with the themes of the program.

Based in New York City and her hometown Cairo, Sara has facilitated various writing workshops in Alexandria, Amman, Wadi Rum and other cities in Egypt and Jordan, addressing the relationship between text and the body, memory and language, the notion and physicality of pilgrimage and other topics central to her work. She holds an MA in arts journalism from Columbia University and is currently pursuing an MFA in poetry at New York University. Her writing has appeared as part of the Halal If You Here Me anthology edited by Fatimah Asghar and Safia Elhillo (Haymarket Books, 2019), as well as in The Rumpus, American Chordata, Winter Tangerine and other literary journals.

A Kundiman fellow also involved in numerous writing and poetry workshops, Philippine-born Jan-Henry Gray was raised in California, and worked as a chef in San Francisco for more than 12 years. Living undocumented in the United States for more than three decades, Jan-Henry graduated from SFU and the Columbia College Chicago’s MFA program; he earned the inaugural Undocupoets Fellowship and awards from the Jack Kent Cooke Foundation and the Academy of American

Jan-Henry's first book, Documents, was selected as the winner of the BOA Editions Poulin Poetry Prize in 2018. In addition to releasing a chapbook, selected emails through speCt! Books, he has placed pieces in several publications, from Chris Soto's Nepantla: An Anthology for Queer Poets of Color (Nightboat Books, 2018) and the Colorado Review, The Margins, Quarterly West and Puerto del Sol.

Malcolm Tariq’s Heed the Hollow: Poems (Graywolf Press, 2019) won the Cave Canem Prize, while 2017’s Extended Play received the Gertrude Press Poetry Chapbook Contest for that year. A native of Savannah, Georgia, Malcolm’s poetry explores the invisibility and vulnerability of “the bottom” as it applies to blackness and sexuality against the backdrop of the American South. Malcolm holds a PhD in English from the University of Michigan. 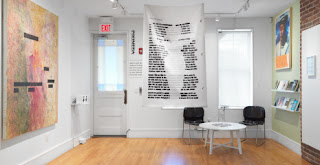